I’m the designated deviled egg maker for our family and since it’s nearly Christmas that means I have to get moving on this. One of the worst parts is generally peeling the shells off the eggs, so when I saw one of those “life-hack” links about peeling an egg I watched. Basically the instructions were to boil the eggs as normal, then with the egg in a small amount of water in a pot, put the lid on and shake hard. I watched the video (sorry I don’t have a link) and it looked magical. So I tried it. Here’s the egg in the water:

And here’s the egg post-shaking, with the shell next to it. It worked wonderfully. 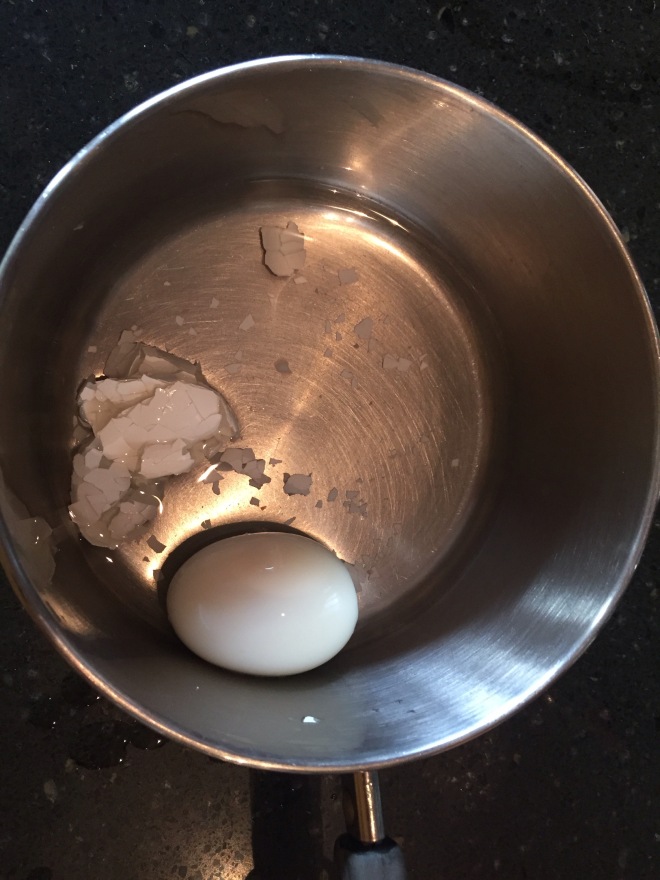 Until the 7th egg. When I opened the top on that I found an explosion of egg parts, It was disgusting and I didn’t take a picture. Since I only had one spare egg (or I did before that disaster) I did the rest the normal way (for me that’s tap all around on all sides and slide the shell off, which worked pretty well this time frankly.)

Beautiful weather recently – I took advantage and got my lunch from a local food truck and walked down to the river to eat. This was my view. I should do this more often!

My last evening in San Francisco a group of us looked for a place to eat near our hotel. I found this little mom-and-pop shop on Google Maps and it had really great reviews, so we walked there. It was very tiny and they were a little freaked out when our group of nine walked in, but they handled it well. The food was fantastic and the prices were very reasonable (and I got my sushi fix!)

However, many of us in the group were chemists and we all immediately had the same thought about this logo design – “that looks like hazard warnings!”

When looking where the arrow pointed, we saw this alley: 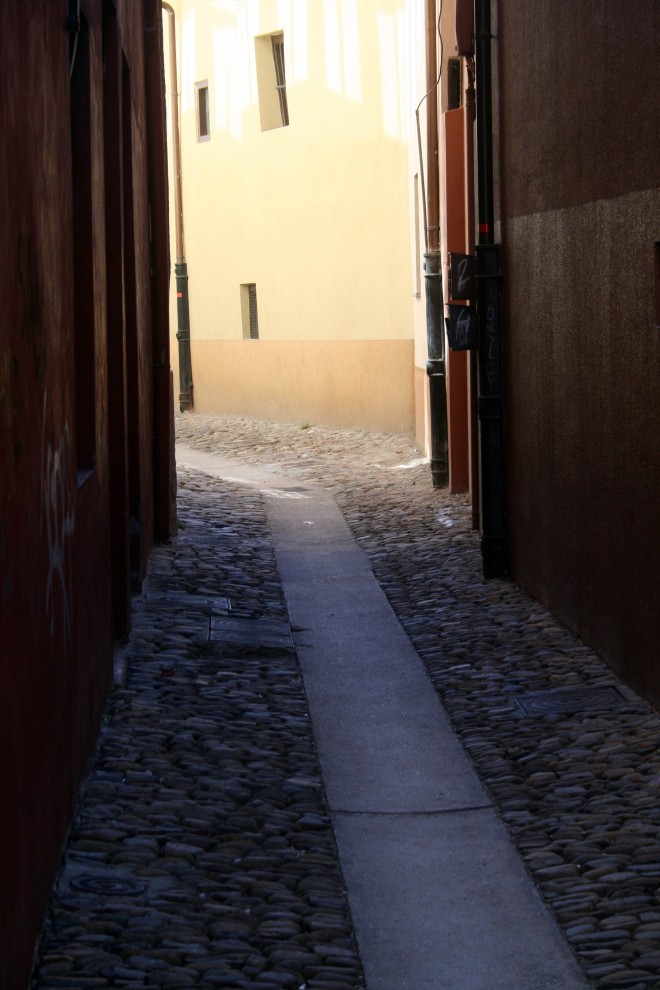 We decided to eat elsewhere.

We arrived in Ponferrada early in the morning and sat tiredly in the hotel lobby until our room was ready. (The staff were amazing – brought us wonderful coffee and fruits and kept apologizing that the room wasn’t ready despite us arriving before most people would even be up!)

When we finally moved out to walk around, we found out there was a festival happening – what timing to catch the final day when we weren’t even aware it existed! It looked like a Renaissance Fair. There was a display of birds including these two rather sarcastic looking owls:

There were also a ton of food vendors. We stopped at this one because it smelled amazing.

This is where we got the delicious festival food I posted earlier (a looong time ago, actually) – and I still have yet to grill jalapenos!

On the one day it rained we ducked into a little place to get some shelter and have a drink. They had the most beautiful food on display, but we weren’t hungry so I just admired it. And took pictures.

Outside the Crystal Palace in Parque del Retiro was a large pond. There were many ducks, and so obviously I took pictures. SPANISH DUCKS.

It took a bit before we realized the pond was filled with turtles. And so of course I took more pictures. SPANISH TURTLES!

After a long walk around the park we stopped at one of the many cafes for a bite to eat. I finally had the first of many glasses of sangria. We were entertained by the little bowls of potato chips that were a normal item handed out (much like a bowl of nuts I suppose, but still…)

I am a fan of simple tasty recipes that also are healthier than the alternative. I’m also a fan of quick. This is even easier than the black bean brownies (yes, you read that right) and is also just two ingredients. Just a box of spice cake mix and a can of pumpkin. Mix thoroughly and then you bake per the instructions on the box. I generally make cakies (cookies that are pretty cake-like) by dropping spoonfuls on a baking sheet and baking the amount of time for cupcakes. But you could do cakes or proper cupcakes too, of course. Enjoy!

My husband and I went out for breakfast at a local restaurant on a recent Saturday. As I perused the menu the grammar errors kept distracting me….

Wow. I can’t believe how long it’s been since I posted something. I know that right after the last post in August we went on vacation and I took hundreds of photos in Spain, planning to post them while there but I never did. And then when we got back I got really busy with work and also I was just a bit overwhelmed by all the stuff I *could* post that I got paralysis about it all and so didn’t do anything. I even took more photos on my walks around home and work and have other items to post about crafts I’ve done with my mom, but I’m just so overwhelmed by choices! AAAAACK!

I have more time off coming up with Thanksgiving, and my plan is to spend some time organizing my Spain photos and doing a lot of posts about our travels there, as well as my usual items. In the meantime, here is a picture of some food we enjoyed in Ponferrada, Spain. As it happened, the first day we were there was the last day of a festival they were having – so we got wonderful festival food for lunch. And this reminds me – I really need to grill jalapenos! That was amazingly tasty.